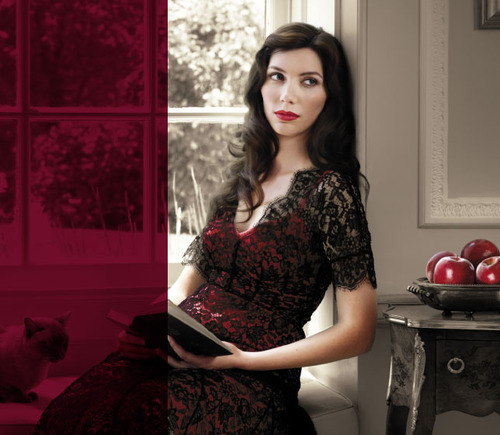 The apple is in my opinion one of our greatest creations.Â  Iâ€™m not sure any other fruit has ever come in such extensive variety.Â  Iâ€™m a huge fan of the HoneycrispTM apples but last night the grocery store only had a few bruised ones left.

I went for the new EnvyTM apples instead.Â  This was the first I had heard of the EnvyTM apple in St. Louis, so feeling adventurous, it was practically my duty as an apple connoisseur to taste this new variety that has popped out of the genetic salt-shaker and made it into our grocery stores in the past couple years.

Admittedly, I was a little concerned by the appearance it would taste like a disgusting red apple by its color, or maybe one of those softer Pink LadyTM apples.Â  But the EnvyTM apple is really crisp and sweet, not to mention half the price of the HoneyCrispTM apples.

I was pleased with it, and Iâ€™ll probably keep eating them.Â  I checked out their website to get some information on these apples and found out it is cross-breed between the Braeburn Apple and the Royal Gala Apple.

Perhaps itâ€™s not so strange to sexualize food in marketing, (we do have Magnum Chocolate and no, it isnâ€™t something a man wearsâ€¦) but Iâ€™m not sure Apple marketing has ever been so sexualized as EnvyTM. Â

Wowâ€¦ give me a bite of that SEXY APPLE!

Then we advertise the “VigorTM” during WWF, UFC, NFL and Monster Truck Rallies, right after the Axe Body Spray commercials.

Hereâ€™s the pitch, and Iâ€™m open for suggestions: a trendy male model walking down the street, eating his VigorTM apple.Â  Heâ€™s fashionable, cool and confident.Â  With biceps flexing, he lifts the apple to his calm face and inserts the apple between his two-days-unshaven stubble-lips.Â  With every crunch, a new lusciously curved doe-eyed lass is irresistibly drawn to him.Â  They cannot peel their eyes away from his face.Â  They cannot stop looking at his junk bulging from his tight pants, (Could they contain another apple, or something else?)Â  They follow him, swooning jealously for his attention, wishing they themselves had an EnvyTM apple to even hope to draw his attention.Â  And then the only thing you have to say is “VigorTM – Apples for Men”.Â  Thatâ€™s it.Â  Simple and to the point.

What apple would you create?

(Originally posted on tumblr “On the Future” here.)